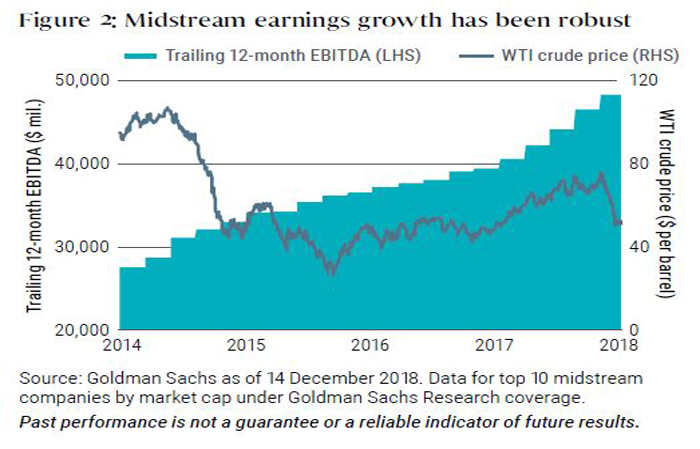 Midstream energy infrastructure companies have, in our view, generally emerged from the balance sheet and financing challenges that had plagued the sector since 2014. With these issues now largely in the rearview mirror, oil and gas master limited partnerships (MLPs) and other midstream firms appear poised to capitalize on the North American energy renaissance – and we believe investors who embrace opportunities in this strengthening sector could stand to benefit over the long term.

Midstream energy companies provide the critical infrastructure linking the supply of commodities, such as crude oil, natural gas and natural gas liquids (NGLs), to end users and include pipeline operators and other firms involved with processing, storage and transport of petroleum products. Midstream firms generally operate under a business model with recurring fee-based revenues that depend on volumes and throughput, which tends to limit direct exposure to commodity prices.

With attractive dividend yields, increasing free cash flow and a robust production outlook, we believe the midstream energy sector may currently be an attractive option for value-oriented investors seeking to invest in critical North American infrastructure assets with high barriers to entry and cash flows secured by long-term contracts. And, based on our view that growth for these companies will likely outstrip the pace of nominal GDP, we believe growth-oriented investors may see a compelling opportunity as well.

According to International Energy Agency (IEA) data, oil demand over the past five years has grown near the fastest clip for any five-year period historically, and we expect continued robust demand growth over the secular horizon even as global economic growth sees a synchronized slowdown over the coming years. Lower oil prices have typically led to stronger oil demand historically, and we expect current valuations to support global demand. In addition, we expect natural gas to grow at an even faster pace than oil over the foreseeable horizon due to its relative environmental benefits for both home heating and power supplies, along with further modest inroads into transport. Lastly, International Maritime Organization (IMO) standards that go into effect in 2020 will likely benefit U.S. producers, due to the requirement for lower-sulfur products in marine transport.

We believe that non-OPEC producers outside the U.S. are not generating consistent output growth and that the U.S. will play a crucial role in meeting future energy needs. This is true not only for crude oil and refined products, but also natural gas, which, in our view, is serving a critical role in helping developing economies reduce carbon emissions, and natural gas liquids, which  are seemingly penetrating deeper into home heating markets and are key to meeting growing petrochemical demand. Simply put, we believe that North American energy production will be a critical input to the global growth engine, and that the midstream sector will underpin this growth.

The resilience of the shale industry and declining per-barrel extraction costs have disrupted the world energy market, and according to IEA data, the U.S. overtook Russia as the largest producer of crude oil in the world in mid-2018. But while the crude markets garner the most attention, they are not the sole focus for midstream companies: A large portion of energy infrastructure capital is being deployed to capitalize on U.S. leadership in low-cost natural gas production and transport, both within the country and in global markets. According to IEA data, nearly three-quarters of global liquefied natural gas (LNG) export growth now originates from the U.S., and the abundance of low-cost natural gas has fueled a petrochemical revolution, with $180 billion of export-focused facilities coming online across the U.S. Gulf Coast by the end of the decade, according to data from the American Chemistry Council.

We expect that rising U.S. crude, natural gas and NGL production (see Figure 1), buttressed by low-cost supply and fueled by strong emerging market demand, will continue to test the existing pipeline infrastructure. This will not only improve current asset utilization, but also create a strong case for new growth projects secured by long-term contractual cash flows.

Although volatility related to oil prices may persist, our analysis of company reports indicates that one important outcome of the oil price plunge in 2014 was that U.S. producers significantly lowered their operating costs by improving drilling efficiencies. As a result, oil-exposed midstream companies may no longer need lofty crude price assumptions to sustain their growth. Indeed, our analysis suggests that breakeven prices for many shale plays are now as low as $40 per barrel – down 40% since 2014, when breakevens exceeded $70 per barrel.

Despite tumult in the midstream sector since mid-2014 – the Alerian MLP Index has substantially underperformed the S&P 500 over the past two years – share price performance alone has belied resiliency in underlying profitability in recent years: Far from crumbling, EBITDA growth has in fact been robust during this period, illustrating the midstream sector’s potential ability to generate predictable revenue streams from long-lived assets (see Figure 2). 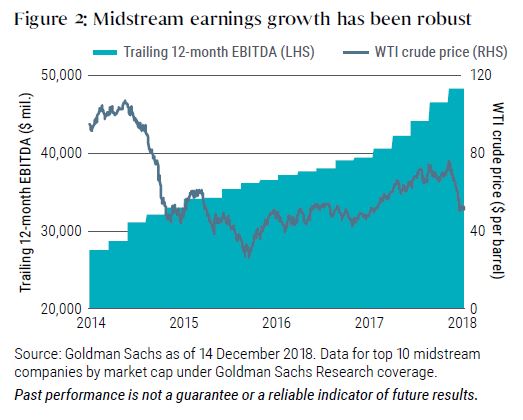 The volatility in oil prices that began in 2014 exposed what we believe to be a structural flaw in the way the MLP sector had financed itself: MLPs were continually tapping the equity markets, while at the same time distributing virtually all cash flows in an effort to make equity issuance more appealing to retail investors, who had been promised a “growing dividend,” according to data from Wells Fargo Securities through 4 December 2018. Add to this an elevated leverage ratio and complicated financing structures, and the sector faced a “buyers’ strike” when oil prices became volatile. The result was the need for highly dilutive equity capital raises to complete ongoing growth projects.

After a four-year adjustment process, we believe midstream companies have generally turned away from equity market financing and now seem to be relying on internally generated cash flows to self-fund growth projects. While this shift has been painful for shareholders, as it required either dividend cuts or moderation in dividend growth to retain cash flows, we believe it has made midstream companies stronger and lessened the need for dilutive equity issuances. Debt levels have moved down substantially, to approximately 4.0x projected for 2019, and at the same time, the average dividend coverage ratio has moved up, to about 1.3x from 1.1x in 2014 (according to Goldman Sachs data). Finally, many midstream companies have simplified their complex corporate structures and improved corporate governance by eliminating incentive distribution rights paid to the general partners, which better aligns the incentive structure for management and investors.

While the midstream energy sector’s fundamentals have greatly improved in recent years, the most notable development may be an apparent change in the management mindset: The focus, in our view, is no longer primarily on growing the yield, but rather on operational discipline, return on invested capital, total shareholder return and long-term value creation.

All in all, after 20 years as a primarily retail-centric asset class, we believe the midstream energy story has now begun to resonate with discerning institutional investors as well.

Key takeaways: The midstream sector appears poised for a rebound

In our view, the midstream sector is at the cusp of a recovery: Funding issues now appear to be largely in the past, dividend cuts are seemingly nearing an end, balance sheet repair seems to be near completion and capital structures have been simplified. As a result, we believe these companies are now well-positioned to take advantage of future growth opportunities, with the potential to deliver attractive risk-adjusted returns to investors willing to take the long view on current market volatility.

Several key factors support our constructive view on the midstream sector, including still-high starting yields, improving company fundamentals, and attractive valuations relative to high yield and other income-oriented sectors, along with a robust oil and gas production backdrop (see Figure 3). MLPs in the Alerian MLP Index are trading at a significant discount to historical valuations, and by our estimates offer the potential for relatively strong annual returns.

Some risks bear watching, however. Despite the recent improvements in the midstream sector, energy markets are cyclical and subject to unpredictable swings in both supply and demand. Geopolitical risks are also an ongoing reality, given the outsize influence of OPEC and the Middle East on the energy markets. Additionally, proposed pipeline projects require regulatory approval to proceed and have faced increasing opposition given environmental concerns. These risks may persist even as midstream fundamentals continue to strengthen.

All told, we believe midstream energy now offers one of the more attractive secular growth stories among all asset classes with support from a favorable – and much improved – entry point.